Is Bladeless LASIK Safe? By William Goldstein on September 27, 2016 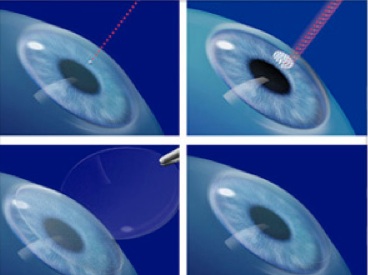 What is Bladeless LASIK?

Bladeless LASIK, also known as blade-free Intralase LASIK, is considered to be one of the safer forms of laser eye surgery. In fact, it is
considered to be the premium procedure amongst all the different types of LASIK surgery
and involves minimal risk and damage to the eye.
Bladeless LASIK is also known as IntraLase or all-laser and it largely differs from other
Lasik surgeries mainly because a laser is used to create the flap. Other LASIK surgeries use a
manual blade to create the flap which is why this technique of LASIK is known as the
Bladeless LASIK technique. With this technique, people having thin corneas and who are
unsuitable for the normal LASIK surgery can now have the same procedure performed using
the Bladeless technique thanks to the precision of this technique. The bladeless LASIK
surgery is able to consistently produce flaps for the corneas that are thin enough to treat all those people whose cornea flaps were too thin to be treated using the original LASIK procedure or any other LASIK method.

Why is bladeless LASIK safer than other techniques of laser eye surgery?

Here are some of the main advantages of using bladeless LASIK technique and why it is safer
for patients. – With the laser flap maker or the bladeless flap maker patients do not have to worry about partially created flaps, buttonholes and free caps. It brings a lot of inner peace and solitude not only to the patient and his well-wishers but to the eye surgeon and his entire line of staff and nurses as well. The risk involved in creating a corneal flap using bladeless LASIK as opposed to using a blade in the traditional LASIK surgery is far less. This reduces anxiety for patients as well, knowing that there is no actual 'cutting' involved.
The flap created using the bladeless LASIK surgery is much better and safer than the flap created using the blade in the other types of LASIK surgeries. It is of a much higher quality. There have been documented cases of complications arising in patients who have had their corneal flaps created using microkeratomes that creates a very thin layer in the middle that could lead the flap to even break or split. None of this will happen using the bladeless LASIK technique.