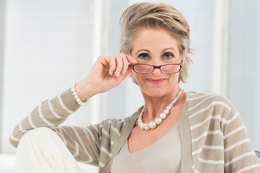 The Femtosecond laser technology was originally introduced as a more precise way to create flaps for LASIK surgery. Since then, this technology has been adapted and is now being used for laser cataract surgery. Femtosecond lasers emit light pulses that last for a very small fraction of a second, known as femtoseconds. A femtosecond is one-quadrillionth of a second. The short optical pulses can cut tissues with more precision and less heat development. The femtosecond is very accurate and can be used for sensitive ocular microsurgery.

During the femtosecond laser cataract surgery, the hand-held tools are replaced by a laser which removes the cataract in the following steps:

Making the corneal incision is the first step in any cataract surgery. In the traditional method, the surgeon uses a hand-held diamond blade or a metal to make an incision in the area where the cornea is joined with the sclera. In laser surgery, the same type of incision is made using a laser.

Before the incision is made, a 3-D image of the corneal area or an optical coherence tomography (OCT) is created to understand the specific location where the incision will be made. By using this technique, surgeons can precisely locate the incision and control its size, shape and depth.

After the corneal incision, the front portion of the capsule that covers the natural lens is carefully cut using the same laser. The capsule is thin and the surgeon takes extra precaution to ensure that in the process the lens remains undamaged. The step is known as anterior capsulotomy. Due to the risks involved, the femtosecond laser is used to perform the procedure with greater accuracy and reproducibility.

Following the capsulotomy, the cataract is removed from the patient’s eye. In traditional surgery, the removal is done by using an ultrasonic device that liquefies the cataract. Sometimes, the ultrasound can produce unwanted heat which can burn the incision. The result can be a negative effect on the visual outcome. The femtosecond laser first softens the cataract and then breaks it into smaller pieces. It takes less energy to break softer pieces and therefore less heat is produced in the process.

The femtosecond laser is a great technology and can easily replace the more popular traditional methods for laser cataract surgery. The laser is accurate and delivers amazing results and is increasing in popularity as surgeons adopt it to increase safety and accuracy.