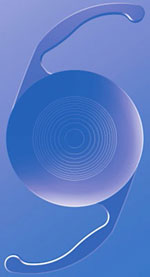 Intraocular lenses or IOLs are an integral part of cataract surgery. Cataract is an aging change that affects the natural lens of the eye and causes it to become cloudy. This, in turn, affects vision. IOLs mimic the function of the natural lens of the eye and try to improve vision after laser cataract surgery. For years surgeons have used generic calculations to develop IOLs. This means that every IOL is designed according to certain general parameters and not according to the needs of each individual.

Surgeons have constantly been experimenting with new techniques and tools to tailor IOLs to the needs of each patient. So far there have been a number of successful breakthroughs. One of the latest developments is the diffractive trifocal IOL.

What is a diffractive trifocal IOL?

The central region of the trifocal IOL is carved with graded heights and distances in a very precise manner. These varying heights bend light in various ways, such as to bring the point of focus closer to the eye thus reducing distortion. The reduced distortion provides for excellent quality of vision. Normally diffractive optics are employed in unifocal and bifocal lenses meaning that patients can focus on near and far objects. But, the evolution of a trifocal lens with diffractive lens took intraocular lens implantation and post-cataract vision to a whole new level.

So far, the clinical outcomes with diffractive trifocal IOLs have proved to be excellent. It was found to improve near, far, and intermediate visual acuity by a significant amount, thus reducing or eliminating the need for glasses. Surgeons also found that sensitivity to the contrast between objects and the background were usually not impaired. The patients involved in the clinical trials were found to have stable vision even long after healing from the surgery.